But how does a heavy train levitate and operate at the same time?

Electrodynamic Suspension (EDS)
Electrodynamic suspension used by the Japanese is the idea that the same two electromagnetic forces are positioned at the undercarriage of the maglev train and on the track, this creates a repulsion force because two-like forces repel thus resulting in the levitation of the maglev train. In addition, electromagnetic forces are positioned on the side of the guideway, this creates propulsion, the force in which the maglev train moves forward. The propulsion is created when magnetic fields are created from electricity flowing through the supercondutors on the guideway tracks.

Figure 2: Diagram of Coils and Supports in the Guideway
Going more in-depth on how the levitation and propulsion function together effectively on a maglev train based on electrodynamic suspension is through the use of coils. Coils are found on the edge of the guideway and wrapped around them is a superconductor. Being a superconductor, electricity flows through the them with no difficulty as there is no resistance, the coils produce a magnetic field of north and south forces.

So how does propulsion come into play? 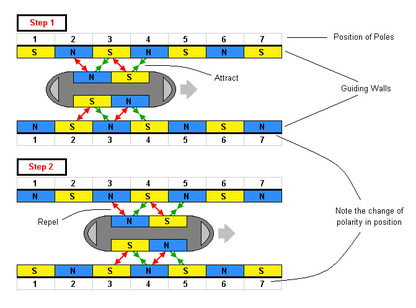 
After the train moves forward the train runs into a problem, the forces of magnetism cause the train to repel and attract backwards, thus resulting the train to stay in one spot. To solve this problem, engineers change the polarity of the coils, creating the opposite force than it originally was, an example of this is seen in Figure 3 step 2 where the forces of magnetism at the top of the guideway is north, south north, etc. whereas in step 1 of Figure 3, the magnetic forces of the coils start as south, north, south and so on (top of step 1). Engineers successfully alternate these forces by using A/C current on the coils. As the polarity of the guideways are changed continuously , it allows the train to propel forward, using the attraction and repulsion forces. The magnetic forces on the train "chase" the forces on the guideway (magnetic field created by the coils move forward) which results in the movement of the train.